California Could Enact The Most Important Sports Bill Of All Time

November 6, 2019 | Comments Off on California Could Enact The Most Important Sports Bill Of All Time | News 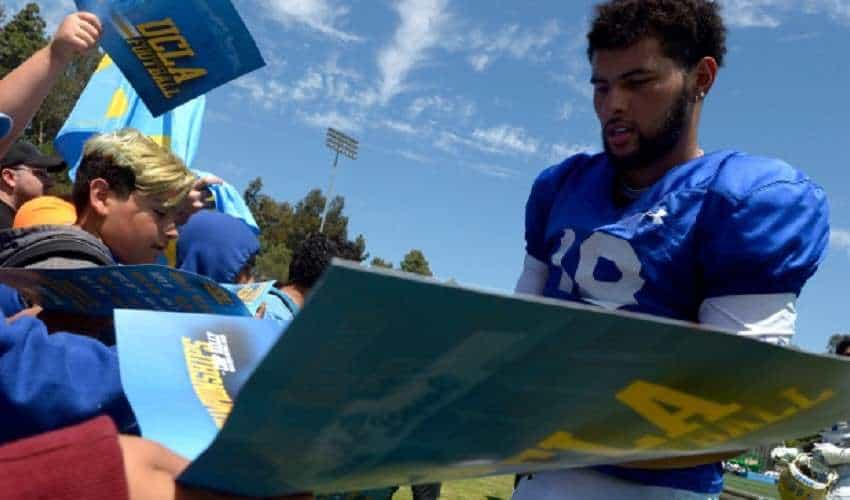 Several states have legalized sports betting this year, and it’s been a positive boon for tax coffers and consumers alike. Betting on athletics is hugely popular in the US, and the sports wagering market continues to grow.

But believe it or not, for the sporting world, there’s actually a bigger watershed moment on the horizon. Much bigger.

You might even call it a “storm” or “cyclone,” but those have negative, destructive connotations when this is a fundamentally positive development across the board.

Are you sitting down?

Because college athletes might finally be able to get paid!

Ironically, in a market saturated with political controversy and unending discussions about “the integrity of the game,” the biggest groundswell in American sports – possibly ever – has nothing to do with gambling, and it’s coming from a state where legalized betting hasn’t even gotten any traction to date.

On Wednesday, September 11, the California Senate passed SB-206, or the Fair Pay to Play Act, by a vote of 39-0. If Gov. Gavin Newsome signs the bill, it would become law, taking effect in 2023.

The Fair Pay to Play Act, in a nutshell, would make it illegal for schools in California to rescind or void a student athlete’s scholarship status and on-field eligibility for profiting off their likeness or accepting endorsement payments.

The NCAA, which has made hundreds of billions of dollars off the backs of its enormous uncompensated labor force (and which has only ever been explicitly called out for it by an adult cable TV cartoon), is not at all pleased with the development.

NCAA President Mark Emmert, who opposes the Fair Pay to Play Act because of course he does, wrote to California legislators imploring them to vote against the measure in the days leading up to its passage.

In short, Emmert attempted to take the position that the NCAA would have to ban California-area schools from competition if their athletes take advantage of SB-206’s entitlements. The NCAA has even contacted Newsome directly to warn him against signing the legislation.

Forbes contributor Thomas Baker explains the nature of Emmert’s bluff, calling it a “fear mongering” screed filled with threats that would “never come to fruition.” Baker’s metaphor sums up the field of play nicely:

“If this were a game of chicken, California would be behind the wheel of a tank matched against the NCAA’s Vespa.”

While Baker makes strong arguments about why California holds all the cards in the matter, you don’t even have to consider every last example to understand why the NCAA has no moral leg to stand on with their argument that college athletes shouldn’t be paid.

Reality, as is so often the case, is simpler:

• College athletes, whether on scholarship or not, are required to attend classes and maintain passable GPAs. The same is true for non-athletes on scholarship and all students in general.

• College athletes are required to practice with their teams for up to 20 hours per week to maintain their scholarships and/or places on those teams. This is equivalent to a part-time job but is entirely uncompensated.

• Most non-athletes on academic scholarships have no extracurricular requirements and may seek part-time employment. Further, they are allowed to profit off their names, likenesses, and abilities.

Bottom line: A college athlete is required to work an uncompensated part-time job, and if he or she attempts to use their status to make money for normal living expenses, they can be banned from their sports and/or have their scholarships stripped, materially limiting their future earning potential.

College athletes are not allowed to make money until they leave college.

Despite the simple truth above, there have been some objections of the Fair Pay to Play Act on the grounds that it is unconstitutional. The NCAA’s chief legal counsel, Donald Remy, used this argument when discussing the bill with the Associated Press.

“Numerous legal scholars assert that SB 206 is constitutional and that an NCAA ban of California colleges from championship competition is a clear violation of federal antitrust law. The NCAA has repeatedly lost antitrust cases in courts throughout the nation. As a result, threats are their primary weapon.”

Here’s what the NCAA is really afraid of: If the Fair Pay to Play Act is signed into law, California schools will be the only schools in the country where athletes can make money off their own likenesses, from signing autographs to posing for pictures to selling jerseys and so on. In the recruiting game – particularly as concerns the NCAA’s biggest cash cow, college football – that would be disastrous for teams in the rest of the US. All the best players would simply go to California, gutting any semblance of competitive parity.

That’s not a bad argument. But there’s also a very compelling counterargument to be made.

For betting fans, the Fair Pay to Play act could be a major boon to the gambling market, too.

While real-money gambling is a major industry both domestically and offshore, there has always been an element of concern among those looking to keep college athletes out of harm’s way. Historically, the anti-gambling set has argued that these athletes – because of their amateur (read “unpaid”) status – are often targets of underground bookmakers.

However, by ensuring that athletes are fairly compensated, those athletes would be almost totally de-incentivized from taking dives for money in the first place.

This makes policing the sports betting industry cheaper, easier, and more transparent, which translates to wider national acceptance of the industry and more opportunities for millions of fans to bet on college players and teams.

Several states have legalized sports betting but have banned in-state college wagering. Others have banned prop bets on college athletes. With the Fair Pay to Play act in full swing, these limitations would no longer be necessary.